In 1987 Congress passed a resolution declaring March to be Women’s History month that year. Since 1995 all U.S. presidents have issued annual proclamations to continue the tradition. It was time for Highland Jazz to get into the act. Henrietta Robinson, then host of WGBH’s Friday night Jazz Gallery, proposed the idea of an all-female quintet comprised of composers, arrangers, band leaders, vocalists and instrumentalists. The quintet took the name Women in Jazz Know the Score.. (and a whole lot more). For the program the group not only chose jazz standards but also featured their own arrangements and original compositions.

Henrietta was producer, band leader and vocalist. Carolyn Ritt, recording artist, band leader, composer and professor at Berklee, was the pianist. Diane Wernick, instructor and leader of the band “Bop/a/Nova,” played soprano and alto sax. The drummer was Carolyn Castellano, a member of “Boungainvilla” and co-founder of the ensemble “The Lydian People’s Front.”  On acoustic  bass was Jane Wang, a member of the ”All Nationalities of Women” jazz ensemble as well as the groups “Wide Out,” and “The Lydian People’s Front.”

Founders Hall was packed for this debut and I knew that we had started a yearly tradition.

Following Women in Jazz Herb Pomeroy and his quartet presented a reprieve of “Reminiscin’ in Tempo” featuring the music of Duke Ellington and Billy Strayhorn.

One of my dreams had always been to present a concert with Dave McKenna. For as long as I could remember I had been a great fan of his. I frequently went to the Copley Plaza Bar to hear him during the seven years that he played there (1981-1987). (http://troystreet.com/tspots/2013/06/24/june-24-1989-dave-mckennas-last-set-at-the-plaza-bar/)

It was a very comfortable room with deep lounge chairs, not unlike a typical living room. There were also a few high chairs surrounding the piano. If you got there early you might be lucky enough to find one of those seats empty and then you were in for a great treat. Musicians used to comment that Dave “knew all the tunes.” I heard a story that when he was a young man he was featured once a week on a live radio broadcast. People would call the program and ask for a tune, hoping to name one that Dave didn’t know. He was rarely stumped.

He used to like to play tunes which had a common theme, depending on what his mood was, or what he might be thinking about. For example, he might do a medley of tunes about weather, or Paris, or baseball. He was a great fan of the Boston Red Sox. If a game was in progress he couldn’t wait to take a break and leave the bar to check the score in his room upstairs.

I never seriously thought he would do a concert for Highland Jazz. I doubted that I could afford his fee. However, Gray Sargent suggested that he and Dave perform a duo. He agreed to call Dave for me and much to my surprise Dave accepted. He even agreed to stay at my home to save the cost of my paying for a hotel room. The dates were April 21 and 22, 1995.

The plan was for him to arrive at my home late Friday afternoon and leave Sunday morning. He would stay in the den which had its own bathroom, TV and piano. Of course I had the piano tuned, thinking that I would probably have a private concert from my favorite pianist right in my own home.

A few days before the weekend Dave called to tell me that he was coming with his wife, Frankie, and that she would require her own room. All I had left was a single bed in my son’s former bedroom; Dave said that would be fine.

When they arrived it was obvious that theirs was a strained relationship. I showed them their accommodations and reminded them that the house was smoke-free. If they wanted to smoke they would have to use the breezeway off the kitchen. Neither one looked very happy about that news.

Then Dave went into the kitchen, opened one of the cabinets and took out a plastic cup that I had received as a promo from Dunkin Donuts. It was one of those cups with plastic suction in the bottom that would attach to the dashboard. “This will be my cup while I am here,” he told me. I was rather taken aback. He had obviously picked the cheapest cup I owned. I told him that since I had plenty of nice cups and a dishwasher, he didn’t need to confine himself to that one. “No,” he replied, “this will be my cup,” and he left it on the counter. I guess that was his routine on the road when he stayed as a guest at someone’s house .

I thought the concert went very well Friday night.  We had a good crowd and Dave and Gray couldn’t have sounded better. They were both what I call “quote masters;” that is, in their solos they would insert bits and pieces of other tunes to amuse each other and sometimes confound the listeners.

During intermission Frankie sat upstairs at a small table where CDs were for sale. She confronted me right before the break. Did I expect her to give Highland Jazz a commission for anything she sold?  I explained that wasn’t our policy, but she remained rather irritated all evening.

When we got home Dave immediately complained about the piano, that it was stiff and hard to play. Here was a musician who described himself as a saloon player, who often played in cafes or restaurants where the piano was in poor shape. No one else had found the piano at Pine Manor inadequate and I was quite surprised. Maybe something else was going on. As for Frankie, she was angry that Gray had left her in charge of selling his CDs. “Why didn’t he bring someone to do that?” I said nothing in response.

Things didn’t improve the next day. I invited them both out to lunch, hoping to ease the tension in the house.  Since Dave declined I was left with Frankie. It was more of the same- stories about people who took advantage of Dave, who didn’t appreciate him enough, who recorded him playing without his permission etc., etc.

Saturday night we had a standing-room-only crowd. This time there were no complaints from Dave about the piano. I think he really enjoyed himself.  The two musicians seemed to read each other’s minds when it came to improvising and challenging each other.

Here is what Gray wrote about playing with Dave- “It’s a dream playing with him because he’s such a great musician. Absolute genius. Working in a duo format, it’s like having a small orchestra behind me. He has unbelievable ears. It’s like he’s soaked in all the music he’s ever heard, and it seeps out little by little when he plays.”

When we arrived home, Dave looked around the kitchen and noticed a box of matzo on the counter. Passover had just ended. “Can you make matzo brie?” he asked. I was shocked to hear him use the Yiddish phrase for fried matzo. I told him I could. He explained that the best matzo brie he ever had was when he stayed with a member of Benny Goodman’s band. He had never tasted anything like it since. I promised to get up early the next morning and make him a double serving.

Around 7 am Sunday morning I heard him moving around downstairs. I got up quickly and hurried into the kitchen. The fried matzo came out perfectly. Dave left nothing on his plate, though he didn’t say how it compared to the version he had eaten years before.

Frankie left about noon, but Dave remained because he had a gig later that day. When we were alone in the kitchen he told me that a young woman, named Liz, was coming to pick him up and drive him to the venue.  “She’s my girlfriend,” he explained, “although I shouldn’t say anything to you. You and Frankie seemed to be pretty close.” I explained that I was not close to Frankie in any sense. “Of course there’s nothing for you to worry about,” he continued. “It’s just a platonic relationship.” That was clearly more information than I needed to know.

Soon after the doorbell rang. I opened the door to find a nice looking woman, quite a bit younger than Dave. A few minutes later they left together.

The next day I called Marshall Wood who had played with Dave on Sunday afternoon. “So, what did Dave say about the fried matzo I made for him?” I imagined that now I would be featured in one of Dave’s many stories. “Oh, he didn’t mention the fried matzo,” Marshall replied. “All he said was that you made him smoke outside the house and that it was cold.”

And did he ever play the piano while he was there? Not a note. For him this was just another gig and he certainly didn’t need to practice.

The season ended with two solid programs. The first in May featured the Donna Byrne Quartet with Tim Ray on keyboards, Jim Gwin on drums and bassist Marshal Wood. This was the first time Tim appeared at Highland Jazz and he soon became a frequent performer.  By this date Donna had issued two CDs, “Sweet and Lovely” and “Let’s Face the Music and Dance.” She had also appeared in New York City at Rainbow & Stars, the Blue Note and Tavern on the Green.

In JuneAlex Elin returned with a reprieve of a 1991 concert, “Masters of the American Songbook.” This concert featured trumpeter Lou Colombo as special guest, Alex on piano, Joe Hunt on drums and Mark Pucci on bass. The quartet played tunes by some of America’s most beloved song writers including George Gershwin, Cole Porter, Jerome Kern and Irving Berlin. It provided a strong ending to an exceptional spring season.

September marked the return of Meredith d’Ambrosio and Eddie Higgins – always a crowd favorite. The Philadelphia Daily News described Meredith as follows- “I can’t say enough about Meredith. Here is a singer and a musician who knows her own voice in a way that the best soloists in jazz know their instruments….” 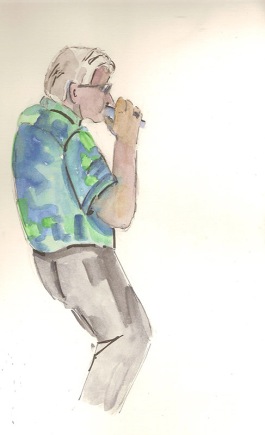 In November I presented a newcomer to the series. “Settin’ the World on Fire” featured Mike Turk, a virtuoso harmonica player who had been called the “Toot Thielemans of New England.” He simply amazed the audience with his playing, making the lowly harmonica perform like a true jazz instrument. Joining him were Paul Broadnax on vocals and keyboards, Joe Hunt on drums and Dave Trefethen on guitar and bass.

Carolyn Castellano teaches at Brookline High School and actually brought her jazz band to perform as the opening act of a recent concert. In this video (http://blip.tv/improvlive365/episode-269-we-just-do-that-6372436) she talks about her goals in teaching music to high school students.

Carolyn Ritt Wilkins is a professor at Berklee in the ensemble department. (http://www.berklee.edu/people/carolyn-wilkins ). She is also the author of Damn Near White: An African American Family’s Journey from Slavery to Bittersweet Success (University of Missouri Press)

Diane Wernick is an assistant professor of the ensemble department at Berklee. (http://www.berklee.edu/people/diane-wernick).

Dave McKenna passed away in October 2008 at the age of 78. There will be more about his legacy in a later post.  Dave plays two tunes about the heart in this video. (http://www.youtube.com/watch?v=9SAQy4oi2y8 ). It is a good example of the various rhythms he could produce with his left hand, which acted as its own rhythm section.

Mike Turkl’s web site has all the latest information about his recordings and current activities. (http://www.miketurk.com/)