Another venue change, but this time we had no choice. The tenants in the building which faced the bakery parking lot had complained about the music. Evidently some of them had office hours at night and found the music too loud and disturbing. This came as a serious disappointment to Mario who sponsored the concerts in part to bring attention to the three businesses he owned in the Newton Highlands square.

Where to go? We got permission to use the Hyde School playground less than two blocks away. It was far from ideal. Unlike the bakery parking lot, where the buildings provided an informal stage for the musicians, here they had to play in an open field. The sound quickly dispersed; it was difficult to set up the lighting and worst of all the mosquitos were fierce. The atmosphere was altogether lacking in charm.

On the plus side the audience had the chance to hear some new players. Mili Bermejo returned, this time accompanied by Tim Ray on piano and Jim Gwin on drums. Both Tim and Jim would appear in numerous future concerts.  In fact Tim Ray became one of the audience’s favorite piano players.

The third concert featured Cecilia Smith on vibes, Anthony Peterson on guitar, Ron Savage on drums and Ron McWhorter on bass. I am sure this was the first time that the audience heard a woman play the vibraphone and she was excellent as this short video shows. 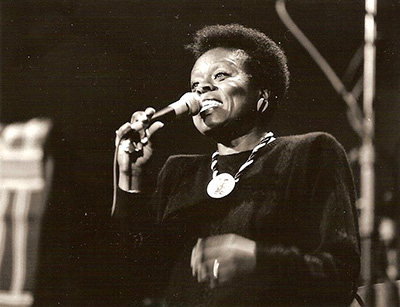 Vocalist Henrietta Robinson was also a new face. She too would return many times, including as the leader/organizer of a Women in Jazz program. Accompanying her in the summer were Carolyn Ritt on keyboards, Herbie King on drums, John Voigt on bass and Ken Wenzel on trombone and flute.

For the very first time it rained on the night of a concert and we had to postpone Henrietta’s performance until the following night.

This was the first time in five years that we had to cancel a summer concert. I was really disappointed as were the musicians.  The next night the weather was still not great and we had the band set up in front of the bakery under the protection of the awning. The audience sat in front at tables and seemed to be perfectly delighted to hear the music. It just wasn’t a very large crowd for Henrietta’s first Highland Jazz appearance.

After graduating from Berklee Cecilia Smith taught there for four years. She then moved to New York where she is actively playing in both a large band format and in small ensembles.