1988 stands out as the year of Newton’s Tri-Centennial.  The city calendar was full of interesting events: musical performances, a lecture series, garden and house tours and a free jazz concert on Memorial Day, May 29.  The location was the Newton North High School football field.  Mario, who was a member of the Newton Pride Committee, convinced them that Highland Jazz should organize the concert.  Of course, that meant that I would organize it.  Unlike Highland Jazz, the city had serious money to spend.  I day-dreamed about whom to hire.  Number one for me was Sonny Rollins, whose music I adored.

When the Committee presented my idea to the mayor, Teddy Mann, he answered “Never heard of him.”  So much for that dream.  The mayor then mentioned three other names: Dave Brubeck, Stan Getz and Dizzy Gillespie.  I decided on Dizzy who had recently celebrated his 70th birthday.  I always preferred to work directly with any musician I hired, avoiding agents if I could.  This was impossible in the case of Dizzy.  Even if I knew how to get in touch with him, he would probably have refused to negotiate with me.  So I called Ted Kurland Associates, the leading agent in Boston, and learned that for $10,000, Dizzy would be happy to play in Newton.  The agent also told me that the contract required a $5,000 deposit.  The Committee agreed and we started to finalize our plans.  Mario’s wife created a dynamic poster entitled Dizzy in Newton and we ordered hundreds of T-shirts to sell at the event.

Her design featured a pencil sketch of Dizzy blowing his horn, with cheeks puffed out. The shirts were priced at ten dollars and were all sold by the end of the concert. For some unknown reason I didn’t buy one. Mario also planned to set up a V.I.P. tent and serve lunch to the “dignitaries” he invited.

“No,” answered the agent, “Cash before the concert or he won’t play.”

I suppose that Dizzy had been stiffed plenty of times during his playing career and for that reason he wanted his money upfront.  When the mayor learned about the new request, he was furious.  He protested but there was nothing we could do.  I thought secretly that we should have hired Sonny Rollins.

In those days banks weren’t open on Saturdays.  So the mayor had to call the president of the Shawmut Bank in Newtonville and ask him to personally open the bank Saturday morning so that Dizzy could cash the city’s check.  Dizzy went straight from the airport to the bank.  Shortly before the concert I learned that the Pride Committee actually didn’t have the $5,000 on hand and that Mario himself had volunteered to cover the check. Maybe Dizzy knew something that I did not know.   I also heard that in order to pay Dizzy Mario hadn’t made payroll that week. I still wonder where Dizzy stored the money during his performance.  I fantasized that hundreds of bills would suddenly start to float down over the field.

Evidently Antoinette did not know about Mario’s $5,000 donation. While we were sitting in the VIP tent she turned to me and asked “who was paying for all this.” I answered that I hoped she was enjoying herself because Mario had paid. 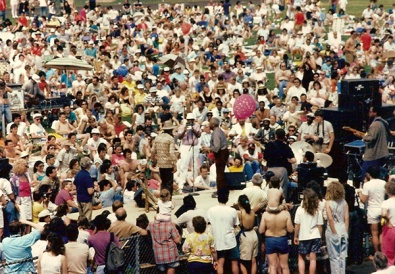 According to television coverage more than 6,000 people attended the event.  It was a blistering hot day but thankfully no ambulances were required.  My son Benjamin acted as chauffeur for Dizzy’s rhythm section.  He told me later that during the drive from the airport the musicians complained bitterly about the low pay they were receiving for the concert.  I guess most of the $10,000 went to Dizzy and his agent. 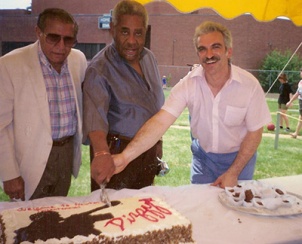 The city had agreed to let numerous vendors sell refreshments on the narrow street in front of the football field. Here’s one memory that I still find odd. As soon as he arrived Dizzy was escorted to the basement of the high school where he waited until it was time for him to play. He  appeared briefly at the V.I.P. tent right before he went on stage and  only greeted a handful of the musicians who had come to see him.

Evidently he sent out for some food from one of the trucks. Since I really wanted to meet him in person I got up my courage to go down to the basement and asked him to autograph my Dizzy in Newton poster. I found him sitting all alone, eating some food which looked neither healthy nor appetizing. I am sure that to him this was just another gig, nothing too special, whereas for me, it was the biggest concert Highland Jazz had every organized.

The music opened with the Alex Elin Quartet which according to one reviewer “played a buoyant set of bebop.” Then Dizzy’s band came on stage.

He was accompanied by guitarist Ed Cherry, drummer Ignacio Berroa and electric bass player John Mead, whom Dizzy laughingly described as “our own personal celebrity, a direct descendant from General Robert E. Lee.”

We had also hired saxophonist Sam Rivers to fill out the group. Although Rivers was born in El Remo, Oklahoma he had strong roots in Boston, having studied at the Boston Conservatory and Boston University. He had been involved in the Boston jazz scene working along with other students who later became well-known jazz musicians such as Jaki Byard, Gigi Gryce, and Paul Gonsalves. A young Tony Williams introduced him to Miles Davis and he joined his quintet for a short time. Later on he became known for his avant-garde playing. I was delighted that he agreed to do the concert since both Dizzy and he were an integral part of the bebop era.

Most of the news reports stressed the size of the crowd and the universal popularity of Dizzy’s music. After all even young people knew him from his appearances on the television show, Sesame Street. But one critic mentioned that “at 70, Gillespie simply doesn’t have the energy ..to duplicate his former feats of wonder and…saves his lung-power by playing the clown more than playing the horn…On every tune, Gillespie briefly stated the theme, and then Rivers took over with a substantial idea-laden improvisation. Eventually, Gillespie came back with a short, full-toned solo.”

I was hopeful that this concert would finally put Highland Jazz on the map and bring large crowds to other events. Unfortunately that didn’t happen. Yes, people would come out to Newton on a blistering hot day to hear a legendary jazzer play. But they wouldn’t come to another concert which merely featured local Boston musicians, no matter how excellent they were!

Both Dizzy and Sam Rivers are gone now. Sam died in 2011 at the age of 88. In this soulful clip he plays the ballad “Beatrice” which he wrote for his wife and which has become a jazz standard. 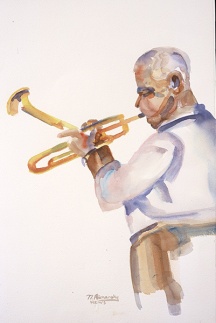 Dizzy died in 1993 at the age of 76.  Watch this wonderful video of Night in Tunisia from 1978 with Dizzy and Stan Getz. It is followed by some playful  improvisation on Dizzy’s part, great fun to watch.