We already had some of the pieces in place when we decided to sell recordings of our live concerts. In 1986 the available technology produced vinyl long-playing records, reel to reel tapes or cassettes.  CDs were just on the horizon but most people only had record or cassette players at the time.

We could never have started a recording label without the help of Ed Williams, our recording engineer. Ed was an enthusiastic supporter of Highland Jazz and a very loyal volunteer. He had been making cassettes of each concert and giving them to musicians so that they could review the concert, analyze the music, consider changes etc. Ed could produce multiple copies of any cassette he had recorded. Our first step was to obtain the musicians’ approval. We offered to pay each musician a $50 recording fee for permission to use a live concert recording. Ed wouldn’t accept any reimbursement for producing the tapes.

Our initial project was to produce four cassettes under the Highland Jazz Presents label. We made them available for holiday gifts in December 1986. We priced them at $7.00 each; the price dropped for a purchase of multiple cassettes. Ed offered another huge advantage. Whenever we got an order, he filled it. No need to stock any inventory. 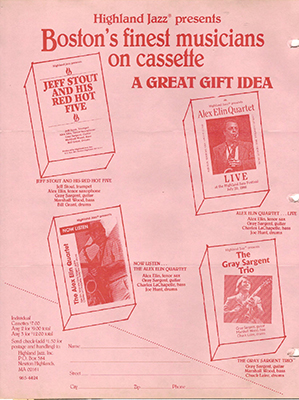 Our next step was a lot more complicated – a vinyl recording. This do-it-yourself project began with a live concert at the Berklee Performance Center in February 1987. It featured Alex Elin on tenor sax, Gray Sargent on guitar, Joe Hunt on drums and Charlie LaChapelle on bass. Because Alex was on the faculty at Berklee he was able to schedule a concert for the performance center; a Berklee recording engineer taped the live performance, but that was just the beginning. Once he received the raw tape, Alex selected six tunes and the order they would appear on the album. He alternated fast and slow tunes to give the record its own rhythm.

In those days we didn’t have the Internet as a resource to provide information about the recording business. I had to use the old-fashioned method; I got a how-to book. It explained what we needed to do.  I contacted an agency to locate the publishers of each song and agreed to pay loyalties, amounting to about 40 cents an album. Another musician gave me the name of a New York company that could produce a master record from a taped performance, and suggested an Arizona firm that would press the records and produce the jacket. Alex chose “Catch the Light” as the title and used his own conte crayon drawing for the front cover.

For liner notes, I enlisted Eric Jackson from WGBH.FM.  Photographer Vic Zabek volunteered to shoot the photos for the album cover. Seymour Levy, a long-time Highland Jazz volunteer did the graphic design. The total cost was $3,000 for 500 albums but that number would have been far greater without help from friends.

The hardest part of any project like this is figuring out a distribution model. I convinced Stereo Jack’s Records in Porter Square, Cambridge and Looney Tunes on Boylston Street, Boston to carry the record. Otherwise we depended on concert goers and our mailing list.

We never did get a major distributor to pick up the recording. I don’t know how many albums are still sitting in Alex’s basement. Bob Blumenthal who was then the jazz critic at the Boston Globe wrote “Catch the Light is an album of substance without a speck of commercial concession. The debut recording by Elin’s quartet…is a supremely relaxed and engaging effort.” Unfortunately, not enough people decided to purchase one.