After the initial indoor concert with Makoto Ozone and Phil Wilson I changed venues and moved around the corner in Newton Highlands to St. Paul’s Episcopal Church. At best the hall accommodated 100 people. It was pretty short on comfort; there were folding chairs which had to be set up before each concert and then put away at the end of the night. Often members of the audience helped out by carrying chairs down to the basement. When the weather turned cold the radiators clanged in accompaniment to the music. And then there was the piano…an old upright with slow action and mediocre sound.

The 1983-84 season featured many of the best musicians in the Boston area. Our goal was to bring  jazz concerts to an audience that might not frequent downtown Boston jazz clubs. At the same time we wanted to offer Boston area and New England jazz musicians a new forum for their music. Boston had a tremendous resource of exceptional players and I was determined to give them the opportunity to be heard and appreciated.

November brought the return of the Gray Sargent Trio at the unbelievable admission price of $5.00. How times have changed.

In December we presented the James Williams Trio with James on piano, Alan Dawson on drums and John Lockwood on bass.

Here is a brief clip of James and John from a recording in 1996. (Jazzhistorydatabase).

James was teaching at Berklee at the time and didn’t have a car. I agreed to pick him up near the school and to drive him to the gig- something I would only have done that first year. I remember his being quiet and soft-spoken, saying very little during the ride to Newton. This was the only time Williams performed for Highland Jazz. A year later he moved to New York City and started to appear with many jazz greats including Art Farmer, Dizzy Gillespie, Freddie Hubbard, Tom Harrell, Bobby Hutcherson, Ray Brown, Tony Williams, Kenny Burrell, and Elvin Jones. 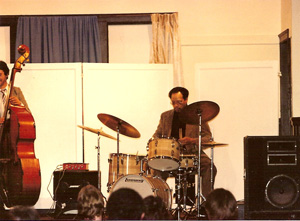 This concert was the first of countless appearances by drummer Alan Dawson at Highland Jazz events. What I remember most about Alan is the constant smile on his face whenever he played. I asked him about it once and he answered “Why not smile; I’m having so much fun.”

I never found out from James after the concert what he thought about the piano; someone else drove him home. But having heard how it sounded I vowed never to use it again. I would either have to forget about hiring a pianist or find some other solution to replace that rather sad upright.

John Lockwood is an Associate Professor at the Berklee College of Music and a member of the Jazz Studies department at the New England Conservatory. (www..berklee.edu/people/john-lockwood). During the past 30 years he has been a frequent performer at Highland Jazz concerts.